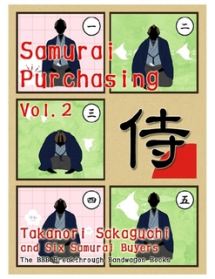 Seven business samurai keep fighting in the fierce competition of this global society. If they failed to win, they would be killed (dismissed) or be forced to harakiri suicide (resign) by their lord (supervisor). Still, they try to keep their challenges.

These heroes inheriting the spirit of samurai only look ahead to the future with their clear eyes and persist in bushi-do, the samurai code, until their death. What is waiting for the goal of their challenges? The person who will witness the tracks and conclusion of their struggle is YOU, the reader of this book.

This work is the latter half of the book originally published in 2007 and revised in 2013 for The BBB: Breakthrough Bandwagon Books.