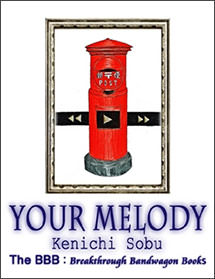 Masayuki Seno, a young pianist, was fired by a record company because his first original album didn't sell at all. At the time, he received a fan letter (more specifically, an audio cassette tape with a recorded message) from a blind girl, who sounded like she was living three years into the future.

"I was involved in a car accident and lost my eyesight ... During the moments of despair, I heard 'Melody', Mr. Seno's music, on radio ... I realized that I could still find hope in my life ..."

Masayuki first thought it was a prank, but he played along with it via the mail exchange between two antiquated cylindrical mailboxes in respective timelines. Future events that the girl said would happen were realized one after another, and he eventually was convinced that she told the truth.

Can Masayuki really compose such a masterpiece titled 'Melody', to give the girl energy to live in the future?

This work was first published in Japan in 2005 and translated in 2014 for The BBB: Breakthrough Bandwagon Books.