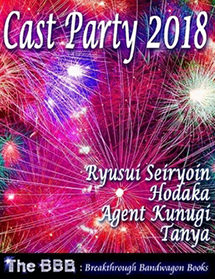 The special guest was Mr. Hodaka, whose "Japanese 100 Great Mountains" series was the most frequently downloaded of 158 works available on The BBB Web site from June to September of 2018.

Mr. Hodaka introduced anecdotes and future plans of his challenges. When would he climb Mount Fuji, the symbol of Japan, and Mount Hotakadake, the origin of his alias? And then, which are the two candidates for the 100th target ...?

The topics in the latter half were about the present and the future of the novel industry. The rivals of novels these days are not novels, but Web-related services such as SNS and YouTube. To entertain the contemporary readers who tend to stay away from long texts because of their shorter "attention spans", which direction should The BBB be heading for? Several new projects for 2019 were announced. The substantial discussions got heated, and went into the overtime.

This Cast Party 2018 was exclusively held at the end of 2018 as one of the made-in-Jpan contents belonging to The BBB: Breakthrough Bandwagon Books.