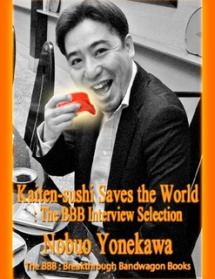 Nobuo Yonekawa works as a kaiten-sushi (conveyer-belt sushi) critic and consultant. In 1971, when he was only five years old, he became fascinated by revolving sushi. Since then, he has visited more than 4,000 kaiten-sushi restaurants in Japan and abroad and has collected over 350,000 sushi pictures. After graduating from a university, he worked for many television programs featuring kaiten-sushi, and his articles were published in magazines.

In 2007, he won a kaiten-sushi championship on a TV program, TV Champion 2, earning the honorific title of "King of Kaiten-Sushi." Moreover, he established the Japanese Kaiten-Sushi Society in 2010 and is launching the Gourmet Navigation website (kaiten-sushi version) in September 2013.

Now Mr. Yonekawa tells us all about kaiten-sushi.