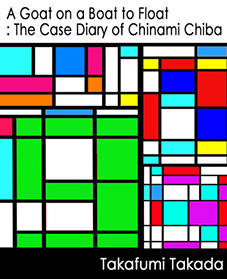 A Goat on a Boat to Float: The Case Diary of Chinami Chiba

Chinami Chiba, a young genius, and his friends witnessed a purse-snatching at a tourist spot. They decided to chase the thief to catch him. They thought they trapped the thief, when they drove him into the shore of a river, which was too wide to swim across.

The thief narrowly escaped the tight spot by using a large boat. The chasers had to use a small boat (holding up to only two passengers) to catch up on the runaway thief. To make matters worse, some of the chasers did not want to go on board with certain specific others. How do they have to plan the passenger combinations of the boat boarding and the sequence of the round trips between the two opposing shores, to get all of them to the other shore and continue the pursuit?

The so-called "river crossing puzzle", a famous logic puzzle, is ideally harmonized with the mystery fiction by Takafumi Takada, a popular mystery writer in Japan. The author is challenging the reader, namely YOU, to solve the brain twister.

This work was first published in 2002 by Kodansha and translated in 2015 for The BBB: Breakthrough Bandwagon Books.