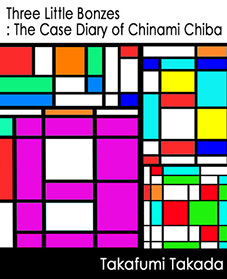 Three young boys visited a resort during their summer vacation and happened to witness a boy running away after apparently his stealing watermelons. Following the boy, they strayed into a temple deep in a mountain. It is said that the old temple was managed by raccoon dogs deceiving people. Then, they met three little bonzes, identical triplets, who had exactly the same look.

This is a blessed hybrid of a logic puzzle and a mystery fiction by Takafumi Takada, one of very popular Japanese novelists. Most of the world should first experience such an amazing masterpiece.

This work was first published in 2001 by Kodansha and translated in 2014 for The BBB: Breakthrough Bandwagon Books.