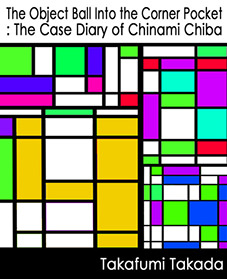 The Object Ball Into the Corner Pocket: The Case Diary of Chinami Chiba

After failing the college entrance exams, P-kun is set to live a carefree life until the next opportunity in the following year. When he is with Chinami Chiba, his cousin and a high school student, P-kun runs into his companion in folly, Aiba Shinnosuke. According to Shinnosuke, who grew up in a police family, Ichigotani, a narcotics officer he knows, has been marking a methamphetamine dealer named Kuroyama.

It is believed that Kuroyama appears at a café called "Carrot" at a specific time on a specific day. While inside the shop, he seems to get information from an accomplice lurking somewhere, and then moves to the site of the methamphetamine deal. The officers do not know how Kuroyama executes his entire drug-dealing business. In order to expose Kuroyama making drug deals, Chinami-kun suggests that they stake out the café at the designated time, and P-kun and Shinnosuke follow suit. Will they be able to uncover the secrets of Kuroyama's dealings?

This is considered to be an ideal fusion of mystery fiction and puzzle solving. The first case in the "Chinami-kun" series by popular novelist Takafumi Takada, which depicts the activities of the high school boy detective genius, Chinami Chiba, is launched grandiosely!

This work was first published in 2001 by Kodansha and translated in 2021 for The BBB: Breakthrough Bandwagon Books.