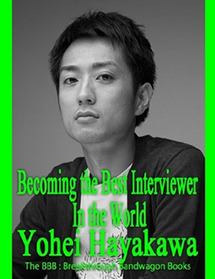 Becoming the Best Interviewer In the World

Yohei Hayakawa became a media journalist after having worked as a newspaper reporter. In 2008 he debuted in the Internet radio program called 'Podcast', and since then he has conducted over 140 interviews. This 'podcast' has been downloaded over 15 million times every year. In recent years, he conducted interviews in the commercials with the worldwide known brands such as UNIQLO and Nescafe.

As the CEO of his own company KIQTAS Co., Ltd., he produces media materials for individual clients, companies and organizations. The core business 'podcast' is widely utilized by public organizations, educational institutions, companies, mass media and writers.

From 2013, he has been working on the worldwide project 'Memories of War' to record voices of the World War II survivors.