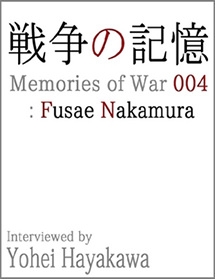 Yohei Hayakawa leads a project titled "Memories of War", which leaves voices of the people who survived Word War II. More than 70 years after the war, the number of people who survived the war is decreasing every year. That is why Hayakawa has decided to leave their 'voices'. He is not supporting any specific organization, and he is not agitating any thoughts.

Fusae Nakamura lost her mother and younger sister due to the air raid on Kure City, Hiroshima, in 1945. Although she was hit directly attacked by a fire bomb, she was brought by an adult near her to a river and could survive. After that, she evacuated with her father and elder sister to her mother's hometown, where they were attacked by air raids again. Her father got remarried with a hairdresser after the war, which made her walk on the same path. Since then, she has been working as a hairdresser for six decades. While she sometimes cried because of her complicated family environment, the profession as a hairdresser has supported her.