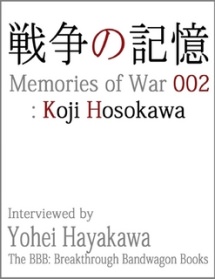 Yohei Hayakawa leads a project titled "Memories of War", which leaves voices of the people who survived World War II. Almost 70 years after the war, the number of people who survived the war is decreasing every year. That is why Hayakawa has decided to leave their 'voices'. He is not supporting any specific organization, and he is not agitating any thoughts.

Mr. Koji Hosokawa, who worked in a navy factory, was a militaristic teenage boy. He lost his younger sister to the atomic bomb and saw the terrible sight around the center of the atomic bomb's explosion first-hand. Sorrow and deep thorn still remain in his mind. He is one of the volunteer guides in Hiroshima Peace Memorial Museum and tells people about his experience actively through participating in the program which is for training successors.

The reason being is the will to train them as successors with Mr. Hosokawa's feeling that:?People think about HIROSHIMA as their own experience. Yohei Hayakawa interviewed him about his experiences.