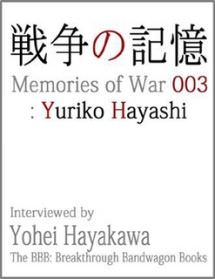 Yohei Hayakawa leads a project titled "Memories of War", which leaves voices of the people who survived Word War II. More than 70 years after the war, the number of people who survived the war is decreasing every year. That is why Hayakawa has decided to leave their 'voices'. He is not supporting any specific organization, and he is not agitating any thoughts.

Yuriko Hayashi is one of the writers of "Children of Hiroshima" which has been read all over the world. This book consists of the children's experiences of the atomic bomb, which is about a total of 105 notes. Late Emeritus Professor of Hiroshima University Arata Osada edited and published it. At that time, she was 9 years old, and she spent many hard times even after the war ended. Moreover, she said it was also much painful for her to dredge up her memories and write the composition. However, in 2013, 62 years after the book was published, she published "Children of Hiroshima, After That". This book is the collection of notes written by 37 writers of "Children of Hiroshima". "I spent many hard times after the war compared to during the war". What feeling does she wish to portray to us?