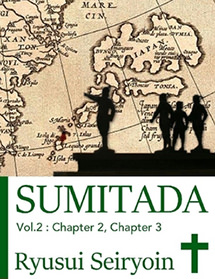 Sumitada Ohmura worshipped Marishiten, the war god, and attained victories in battles. His domain expanded from the east side of the "Harp Sea" (current Ohmura Bay) to the north, the west, and finally the Nagasaki Peninsula to the south-west. Archenemies attacked Sumitada from all sides. To ease the situation, Sumitada took O-en, the younger sister of his two rivals, as his first wife.

"Bateren" from overseas were assaulted by Japanese in Hirado, where Takanobu Matsura (Sumitada's rival) governed, and came to Ohmura for help. Out of curiosity, Sumitada promised to protect them. Bateren told Japanese the teaching of Deus. Fascinated by their doctrine, Sumitada allowed the evangelical activities in Yokoseura Port. When he met Cosme de Torres, the head of bateren, Sumitada decided to become the very first Japanese warlord to be baptized.

This is the second act of the magnificent epic describing the stormy life of Sumitada Ohmura, "the first Christian warlord in the Japanese history."