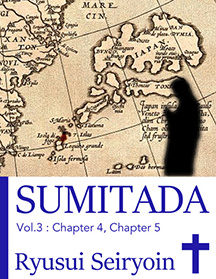 Fascinated by the teachings of Deus (God) preached by the "bateren" (Catholic father or priest) from overseas, Sumitada Ohmura became the first warlord to be baptized in Japan. Sumitada solidified the fierce religious stance, immediately burned down the statue of Marishiten (the war god) that he had once worshipped, and bewildered even his loyal vassals. Meanwhile, a new bateren, Luis Frois, arrived at the port town of Yokoseura, and Sumitada had a fateful encounter with him, transcending race and position to establish the mutual rapport. On the other hand, when Sumitada finally burned down the wooden statue of the previous master of the Ohmuras, the vassals' dissatisfaction with their outrageous lord was reaching its peak.

Sumitada rejected the traditional Buddhist ritual of the memorial services for his ancestors. Instead of paying money and goods to Buddhist monks, he served food to the poor people in his domain as a sign of Kirishitan (Christian) charity. As the number of those who wished to become Kirishitan continued to increase in his territory, Sumitada planned to build a magnificent "ekelezia" (or church) in his hometown of Ohmura. Behind the scenes, however, a plot to kill the bateren and assassinate their lord, Sumitada, was being concocted. In the middle of the night, when it was raining heavily, the Ohmura Mansion, where Sumitada lived in, was surrounded by the rebels and set on fire.

This is the third act of the magnificent epic describing the stormy life of Sumitada Ohmura, "the first Christian warlord in the Japanese history."