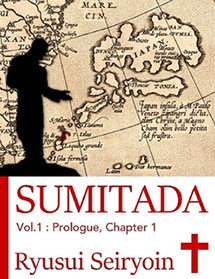 Sumitada Ohmura was born in 1533 AD as the second son of Haruzumi Arima, the mightiest warlord in Kyushu Island (the third-largest island in Japan). Sumitada was adopted into the Ohmuras, which governed the Ohmura area. Matahachiro, who was the legitimate son of the master of the Ohmuras and was one year younger than Sumitada, was adopted into the Gotos in the Takeo area, and was renamed as Takaakira Goto. Then, Sumitada became the 18th master of the Ohmuras. Thus, the foster brothers were entangled to the fate as the "lifelong enemies" to each other.

Internal conflicts among the Ohmuras ended up confining Sumitada at an isolated castle. A young samurai named Sumichika Imamichi rescued Sumitada from his predicament. Sumitada eventually gained the momentum as the master of the Ohmuras, and then trustworthy vassals started gathering around him.

This is the first act of the magnificent epic about the stormy life of Sumitada Ohmura, "the first Christian warlord in the Japanese history."