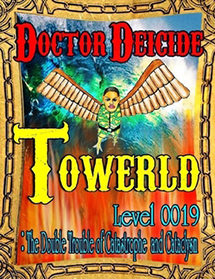 Towerld Level 0019: The Double Trouble of Catastrophe and Cataclysm

No time for taking a break after a breakup.

To quell the riot against the Barrier-free Brigade, which has ruled multiple floors of Towerld, Hector_1304 impersonates "Lazy Lune" Namar Keddaley Llama, the Masked Malicious MegaloMonk. Then, that troublesome tactician gets on his way.

The fire is unleashed, and the indoor space is struck with the catastrophe of hellfire. Then, the cataclysm of tsunami fall from above sinks the world of big building beneath the water. The Chibird runs wild in the confusion, and the upgraded massacre machine marches across the artificially formed lake to close in for the kill.

Will the Twisted Tyrant and his Barrier-free Brigade be subdued by the double trouble of the artificial disasters? What is the objective of the one who has set up this trap?

The all-out war of "the tactician versus the wheeler-dealer" is inevitable. Who will emerge as the victor of the ordeal? Hector_1304 may have to assume the role as the chief guard, the jester, or the bargaining chip.

At the following, you can download a musical track, performed by the Barrier-free Band. Lo! From the orchestration, ye shall feel the catastrophic melody, the cataclysmic rhythm, disastrous harmony, and the void of silence that writhes between them while being buried in the far side of the oblivion.