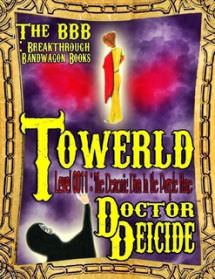 Towerld Level 0011: The Demonic Diva In the Purple Haze

The triple feature has just reached the climax. Mesmerizing music and cigar smoke dominate the space. Have thousands of spectators fallen asleep?

Hector_1304 barely notices a shadowy figure, standing alone in the shroud, and it shocks him.

What is that malicious mien? Is this a reality, or just a dream?

Hector_1304 still moves on to complete the mission to rescue the female squad of the expedition. He has to part ways with the ladies he has met on the feminist floor. While he still cannot get over his habit of flirting, Wendy's jealousy reminds him that polygamy is not a realistic option.

Just when Hector_1304 and his friends are close to the exit from the feminist floor, they encounter the wild cards. Who are going to participate in the stairway showdown, and who will prevail, against whom? Can they finally escape from the tight spot?

Does Hector_1304 have to team up with the rival to prevail? When a reliable ally falls, the mission takes an unexpected turn.

This work was exclusively written as one of the made-in-Japan content belonging to The BBB: Breakthrough Bandwagon Books.