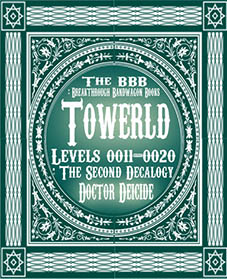 Wicked failures and harsh reality in Towerld exist, even on the upper floors of the gigantic construction. This is indeed a dystopia.

Hector_1304 (the chief guard) and his friends continue their journey to the upper floors, while joining the Barrier-free Brigade, led by Towbie Rhoentey Malgrokk, the Twisted Tyrant, and traveling through the barrier-free spiral slope. During the journey, Hector_1304 experiences polygamy, suffers from a divorce, joins the theatrical troupe to play the masked clown, meets a few friends, faces adversity, is affected by an unnaturally artificial disaster inside the building, and then encounters adversaries.

A mysterious monocled midget named Menogna Jamine-Al Kafieldre attempts to get on Hector’s way and make him suffer, for unknown reasons. She appears to want Hector to not only stop his expedition but also go back to the lower levels of Towerld.

Hector_1304 is not the only one with the obstacles in the journey. As Wendy, the giant-killing postal princess, has her face being painted forcefully with inerasable ink, will she manage to uncover the culprit, or her new nemesis? By the way, what will happen to Gideon Yendrey Drahctrex, the forger in a coma? What does Mary Teana Blockheart, the Pluck Princess want to accomplish, by agreeing to the politically motivated marriage? They find themselves being acquainted to the Stairway Shieldian, even outside his favorite element of stairs.

Can Hector_1304 continue to pursue the expedition to go to the upper floors, while hoping that he can discover the secrets about Towerld, its denizens, and his own origin, little by little? The last thing that he wants to do is to face the turnaround, go downward, or move backward. The inferior world of closed confines has been degenerate to start with, and things can get even worse as if it has not been bad enough already.

At the following, you can download musical tracks, performed by the Barrier-free Band. These are the different versions of the previously released tracks. They may provide you with the different interpretations of the dystopia named Towerld, after getting immersed in the slightly unique aural ambiences that are irradiated from the various orchestrations.