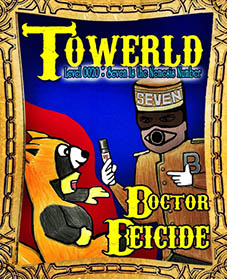 The Barrier-free Brigade is stranded in the artificially induced flood water, and is forced to be on the losing side of the battle.

"Lazy Lune" Namar Keddaley Llama, the Masked Malicious MegaloMonk (the supposed bargaining chip of the upcoming deal) is conducting charades, and Towbie Rhoentey Malgrokk, the Twisted Tyrant, plays along with the farce to lead the storyline villain to deliver such a shocking statement. It infuriates Menogna so much that she decides to further extend the damage. The Creamy Pure, which happens to be involved with the unfamiliar real battle, gets embroiled, and is in trouble! Somebody has to step up to rescue the girldians (supposedly mighty on stage) in distress. Then, who is the unexpected savior? By the way, how pathetic these "heroines" are to be in a position to be saved.

When the Hooded Hag's poison, which has been saved for the last, is finally unleashed, the bargaining chip is used in an unexpected way. The venom is such a game-changer, to the extent that Wendy makes her move reflexively, only to make the situation even worse. Who is this mysterious one that is standing in front of Wendy? Is it that you-know-who? The postal princess is in the most impending peril!

After the battle is over, Hector_1304 is imposed with a new direction to take. Whatever course he chooses in the journey, the future remains grim and dark.

At the following, you can download a musical track, performed by the Barrier-free Band. The orchestration sounds like a treat for the listener's ears, regardless of the continuous struggles that take place in the story.