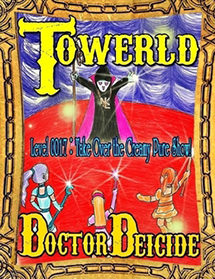 The megalomaniac monk attacks! The girldians with mystic powers stand up to save the world from the impending peril ... Wait. Is there magic in Towerld, which is supposed to be real and realistic?

The theatrical play goes on, to entertain the dwellers of the barrier-free spiral slope (especially kids) and solidify the sense of communal unity. Hector_1304 (replacing the runaway actor), Wendy, and the Wild Cards work for the Barrier-free Big Top, and stumble upon the backstage politics.

Menogna Jamine-Al Kafieldre is in the theater! Is she attempting to crash the play to disappoint the kids, or simply attacking the isolated target on stage?

Hector_1304 improvises to counter the assault. First, he becomes the villain depicted in the storyline. Then he somehow deals with Menogna. Will the stage manage to go on, without letting the spectators be aware of the pandemonium?

Will the farcical mixture of fiction and reality end safely? Beyond the curtain call, the new turns of events will emerge.

This work was exclusively written as one of the made-in-Japan contents belonging to The BBB: Breakthrough Bandwagon Books.