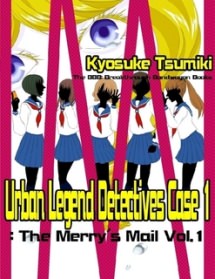 After a girl dumped an old European doll named Merry, which she once used to adore, an email message "Why did you throw me away?" was sent to her and Merry was back to take revenge ...

Such a childish urban legend was told among high school girls in amusement, but one of them was killed brutally on deserted road at night. Then, a ghastly chain email pervaded the school and a real Merry appeared on the police investigation.

This book is the first half of the work exclusively written for The BBB: Breakthrough Bandwagon Books.