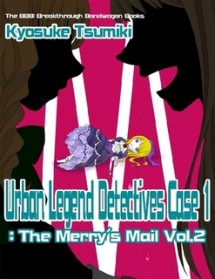 Is the real murder case connected to the urban legend "Merry's Mail"? Detective Kobayashi, who belongs to the Tokyo Metropolitan Police Department, started paying closer attention to the mysterious Merry.

In the course of the investigation, he was appointed to "Urban Legend Detectives" with his co-worker Sarutobi, an attractive girl who is a descendant of a prominent Japanese ninja clan. At the end of the case, they found out the forbidden truth which normally could never be reached.

This book is the latter half of the work exclusively written for The BBB: Breakthrough Bandwagon Books.