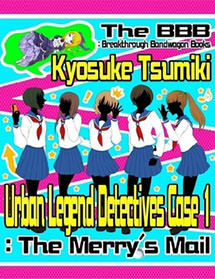 An European doll named Merry, which was once adored and later dumped by a girl, is back to take revenge ... One of the high school girls who love talking about Merry's Mail, the urban legend, was murdered brutally on a lonely road at night.

Detective Kobayashi of the Tokyo Metropolitan Police Department and his co-worker named Sarutobi, a mystical girl who is a self-proclaimed descendant of a prominent Japanese ninja clan, are appointed as 'Urban Legend Detectives'. They start investigating the case of mysterious Merry, and then finally reach the forbidden truth ...