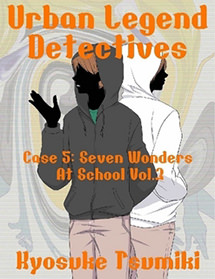 * The complete edition including six cases is also available.

"The Seven Wonders at School demand your blood more and more. The blood of the impure who had tried to reveal the sacred secrets! It's not over yet! It will never end!"

In 1960s, the Seven Wonders at School started spreading suddenly and explosively, to be established throughout Japan. Was it the act of spontaneity, or evil intention?

A folklorist, who was getting to the core of the matter, was murdered two decades ago by a mysterious one wearing a white parka.
Then, what is the shocking truth of "Urban Legend Serial Murder Case", which is implicating the Seven Wonders at School today?

The clues converge into the singularity like magic, and bring the horrible phenomena to light.

This is the final chapter of the longest volume from the "Urban Legend Detectives" series, which reminds us of the excitement in the once-existing golden age of classical mystery fictions. It is the new masterpiece of Mr. Kyosuke Tsumiki, the King of Urban Legends.

Here comes the revelation of all the hidden truths!