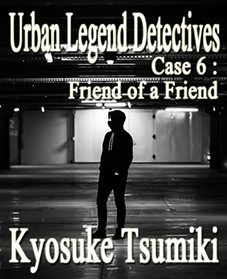 * The complete edition including six cases is also available.

The "Urban Legend Serial Murder Case" in which urban legends passed down among people such as the "Merry's Mail," the "Solitary Hide and Seek," the "Kunekune," the "Samejima case," and the "Seven Wonders At School" ... emerged one after another as real-life murder cases. After discovering the true identity of the ultimate culprit, the "Friend of a Friend," who has been behind the scenes manipulating all the incidents, urban legend detectives Kobayashi and Sasuke finally step into a place where they believe the person is hiding.
What they see there is a nightmare that is out of this world, a reality of runaway human madness …

What is the secret of the "Black Friend" and the "White Friend" who face each other in the locked room?
What is the identity of the doppelganger hidden behind the tragedy?

All the incidents are solved logically and clearly.
And what awaits you, the reader, at the shocking end: God or the devil …?