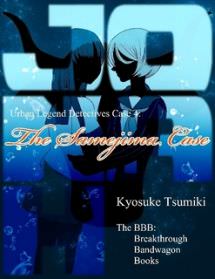 "Let's talk about the case of 'Samejima Island', shall we?"
"Do not even think about it."

The Samejima case is regarded as the most mysterious of the Japanese urban legends found throughout the Internet. Ayano Shiozaki, a high school girl student who was once targeted by the 'Friend of a Friend' (the mastermind criminal) and was saved by Urban Legend Detectives, is tackling the unmentionably taboo case.

Who, or what, is 'Jonah', the uncanny mass murderer, the descriptions of whose appearance seem to change according to the eyewitness accounts? And, what is the 'ritual', repeatedly conducted on Samejima Island?

Ayano investigates the case, and reaches the Sawarahama fishing port. There, she learns of the forbidden and cursed truth that no one shall know.

The 'Friend of a Friend' was born in Samejima Island.

This is the first extra installment of the "Urban Legend Detectives" series, and delves into the origin of the story.