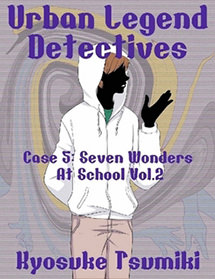 "Jason No. 28, Camellia, Mad Gasser, Hanako, and Inugami. Although I have warned you that much, you have made the stupid choice. You have started the curse of the Seven Wonders at School. There is no one who can stop it now. You are going to have to atone for your sins that you have committed."

Is the eerie comment posted on the Internet bulletin board a death threat? The urban legend fanatics are killed one after another, and their dead bodies are arranged to resemble the "Seven Wonders at School" ... Behind the scene of this new phase of the "Urban Legend Serial Murders", the shadow of the "Friend of a Friend", whose malice awakened during the detestable incident in Samejima Island, is lurking.

Is one of the two survivors of the serial murders the culprit?

This is the second installment of the three volumes of "Seven Wonders at School". The story is now about to reach the climax!