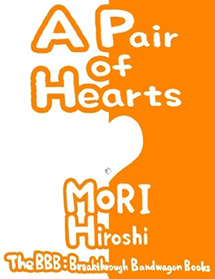 A Pair of Hearts

Kaoru thought she would get married to her boyfriend Thoru soon. However, since she met Satoru, Thoru's younger twin brother, something in her mind had changed. Kaoru noticed that she was being attracted toward Satoru more than to Thoru.

While Thoru was on his overseas business trip, the apartment Satoru lived in was burned down and a burned body was found on the site.

Was it an accident?
Was it a suicide, homicide, or murder?
Whose body was burned to death, Satoru or Thoru?

Did Thoru kill Satoru?
Or, did Satoru kill Thoru?

And, there is only one truth.

This work was first published in 1999 by Kodansha and translated in 2014 for The BBB: Breakthrough Bandwagon Books.