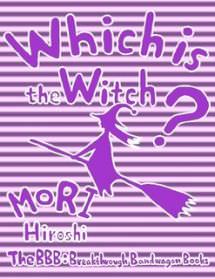 Which Is the Witch?

Moe Nishinosono, an undergraduate student of N National University and a young lady from a prominent family, is holding a customary dinner party in the luxurious condominium she owns, with Dr. Sohei Saikawa, her mentor, and others. The guests include a novelist named Yasutomo Daigobo, Moe's cousin and Saikawa's friend, and Keiko Kihara, who was Daigobo's classmate in university.

Keiko talks about a spooky fortune-teller, whom she consulted with in the shade of a deserted cafe. Then, Daigobo introduces an episode regarding a mysterious woman whom he encountered.

"She disappeared before I knew it, but appeared near me at the next moment. Like a witch."

"Which is the witch?" That is the hint for the riddle pertaining to the two mysterious women. Can Saikawa and Moe see through the truth hidden in the strange events that happened 15 years ago?

This is the second English works of the story from 'S&M (Saikawa & Moe) Series', one of the most coveted mystery fiction series in Japan.

This work was first published by Kodansha in 2001 and translated in 2016 for The BBB: Breakthrough Bandwagon Books.