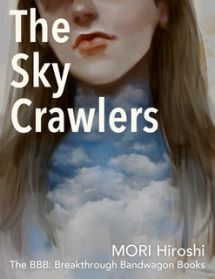 Dr. MORI, Hiroshi, one of the most popular novelists in Japan, recognizes "The Sky Crawlers" as his masterpiece. This complete edition comes with Prologue, Episodes 1-5, and Epilogue. The animation movie version of the same title, directed by the masterful Mamoru Oshii, has attracted the global attention as well.

"Kildren", who live eternally in adolescence unless they are killed in combat or commit suicide, innocently crave for being released from the curse of the gravity, and continue to ascend to the end of the clear blue sky.

I can fall anytime.
I can die anytime.
With the resistance, we cannot fly.

This work is the first installation of the serialized novels for the magnificent "The Sky Crawlers" series, and chronologically the last story in the timeline of the series.

At the end of the book, "The Interview About The Sky Crawlers With Dr. MORI, Hiroshi" is also included.