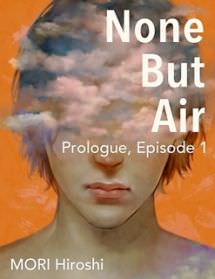 None But Air: Prologue, Episode 1

Everyone called him only by the codename. He was just that special.

I had been admiring a genius pilot, known and feared as the Teacher, who had shot down numerous enemies already. As I had requested by submitting the application, I was assigned to the elite military flight team stationed in this airbase. Then, I started taking off, with the Teacher, to shoot down enemies, faster than anyone, hunting its prey gracefully like a raptor.

"In short, you are already the number two pilot here."

This novel "None But Air" is the second installment from the masterly "The Sky Crawlers" series (written by Dr. MORI, Hiroshi), and it takes place in the earliest chronological phase of the entire storyline. The dawning of the grand story that will eventually lead to the novel "The Sky Crawlers", the finale of the series, commences now.

If you qualify for and are interested in receiving the special offer, please contact us via e-mail at the address written above, with the title "Interview About None But Air" as the subject. In the e-mail, we would like you to write your name, write your e-mail address, and attach the image (jpg or png) that proves your having purchased the three volumes of eBooks mentioned above.