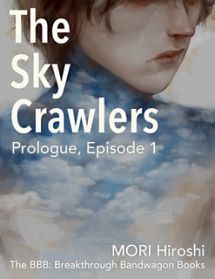 "Are you getting angry, because I just said 'Like a child.' ...?"
"I'm a child." I utter, and then smile.
That is the way it is, because I am a professional pilot. It is a profession that adults cannot take.

The war, which is theatrically staged, goes on in the world. "Kildren" (children who are capable of living eternally in adolescence) engage in actual combat operations as daily routines. Which leads to happier existences, to live or to die?

"The Sky Crawlers" has been written by the revolutionary, the one and only author Dr. MORI, Hiroshi. It has been regarded as THE masterpiece by the author himself. This view of the world is brutally innocent enough to fascinate numerous readers. Also, the animation movie version "The Sky Crawlers", directed by Mamoru Oshii, has attracted global attention.

The English version of "The Sky Crawlers", the novel series long-awaited by the whole world, has just taken off.

If you qualify for and are interested in receiving the special offer, please contact us via e-mail at the address written above, with the title "Interview About The Sky Crawlers" as the subject. In the e-mail, we would like you to write your name, write your e-mail address, and attach the image (jpg or png) that proves your having purchased the three volumes of eBooks mentioned above.