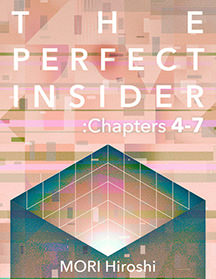 A gruesome murder occurred at the Magata Research Institute on an isolated island. A woman's corpse emerged from a locked room, which was supposed to be monitored by state-of-the-art technology. The body was in a wedding dress with both arms and legs severed.

An unexplained outage rendered phone calls and e-mails unusable. Then, the second murder took place as if to prevent a call to the police, and the helicopter's communication equipment was destroyed. At the facility on the island, isolated from the outside world, Moe Nishinosono, a freshperson at N University, and Sohei Saikawa, Assistant Professor and Moe’s mentor, begin their investigation while interviewing those involved.

Eventually, they reach a mysterious message "Everything turns to F." It was left on Dr. Shiki Magata's computer, where most of the data had been erased. Intuiting that these words may be the key to solving the mystery, Saikawa follows his train of thought and closes in on the truth. As communication with the outside world has been restored, the case starts moving toward its climax.

This book is the second volume of a three-volume English edition of "The Perfect Insider," which was MORI Hiroshi’s legendary debut novel making a significant impact on readers of Japanese mystery novels!